This website gives music lovers and fans of William Anthony more of his story, his artistic experiences, his music and his writings that give us an insight into the challenges he has faced and the life he has lived.

William Anthony was born Julino Willem Anthony on February 23, 1956 in a village called Rincon on Bonaire. Anthony is first and foremost a singer who also performs as an actor and an extra in Dutch television productions.

William Anthony’s love for the music of Bonaire is rooted in his childhood memories on the island of his birth. Bonaire, or as it is known in the most widely spoken creole language of Papiamentu, Boneiru, is an island in the Leeward Antilles in the Caribbean Sea. Together with Aruba and Curaçao, it forms the group known as the ABC islands, located less than a hundred miles off the north coast of South America near the western part of Venezuela.

Caribbean music and music history is often overlooked, yet the Dutch-Caribbean influence on the pan-Caribbean process of creolisation is significant. On Bonaire, Anthony’s birth-place, the history and legacy of slavery shaped culture and music which he has brought back from the edge of extinction.

The music of Bonaire, is a mixture of native, African and European elements, and is closely connected with trends from neighbouring countries such as Venezuela and Colombia plus neighbouring islands. The kind of music that Anthony grew up with were traditional African work songs called tumba. The annual Bari Festival and Simadam Festival also deepened Anthony’s love for Bonaire’s music.

The history of Bonaire is incorporated in 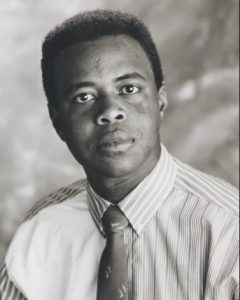 many of the songs from the island sung by William Anthony, for example the story behind the song Mi Deseo relates to the time after the slavery abolition in 1863. Anthony sings songs in Papiamento written by leading Antillian composers from the twentieth century. There are songs that until now were unknown and had never been recorded as well as songs that have fallen into oblivion. Anthony has modified these songs with a fresh sound for modern audiences.

As an example, in his joy for the end of the colonial status and enthusiasm for the obtained autonomy in 1954, Boeis Haile composed a number of songs that express the joy that the Netherlands Antilles has finally gained their own national anthem and a flag. The song ‘Himno di Bandera’ is one of them. He also had a great admiration for the island of Bonaire and composed the waltz ‘Bonaire’ that still has a special meaning for the people of the island. This song is on William Anthony’s album ‘Music from Bonaire’ produced in 1998.

Here is the list of all Anthony’s beautiful covers of unforgettable songs written by leading Antillian composers in the 1960s plus folk songs:

The best songs from William Anthony

On the Kunuku album, the music is a mix of both electronic and acoustic instruments. The lively guitar play in the adventurous ‘Piskadó’ composed by Rudy Plaate and the beautiful orchestration in Ansiedad of José Enrique ‘Chelique’ Sarabia are both good recordings.

Also on Kunuku are two Simadan songs of Bonaire. One of the best-known songs sung in the ‘Kunuku is Mi Deseo’. In the track ‘Remailo’ we can hear the very creative sample of the vocals of the choir Kanta Orchidia from Bonaire also the juicy rhythms of a number of traditional instruments and plain hand-clapping.

Hits from the ‘ 60s, such as the fabulous wals Pa Semper Uni of Rafael Gravenhorst, the sentimental bolero Fo’i Dia M’a Mirabo of Padú del Caribe and the holadijee holadio. Curaçao’s pleasant polka Bam Bam sounds cheerful on the album.

From the album ‘Music from Bonaire’, Snijderslied has travelled a long way to the islands in the Caribbean. Originally from Germany later translated in Flemish. Across the border to the southern Holland and from there to the Caribbean. Just like ‘Schoon is the West’ it has been taught to generations of Curaçao school children by members of the Dutch clergy as part of their contribution to their education.

‘Schoon is de West’ describes a desire for the country of origin. As it says “Never will I ever forget the West, Never even I travel around the whole world. No one can ever measure the love. Love dedicated to my country and my ground.” This song written by Frater Vedastus, Petrus Johannes Bleijs (1905 – 1986), and is sung in schools from generation to generation.

‘Esta Dushi’ was composed by Pedro Pablo Medardo de Marchena whilst in captivity in the camp on Bonaire during the World War years of 1940-1945. In the concentration camp, he wrote a dozen or more songs about physical beauty and being in romantic love with an unattainable woman. The songs held a plea in favour of the Papiamento language against the exclusively use of Spanish and English in popular music. Written on silver paper from cigarette boxes, the collection of songs were unknown for a long time, but one of the songs ‘Esta dushi’ was as ‘Bula waya’ made famous by the Puerto Rican singer Daniel Santos. The song tells about his desire to jump over the fence of the camp and get acquainted with the beautiful woman he regularly sees walking at the other side of the fence.

William Anthony’s songs are available for free streaming, plus high-quality downloads from a number of online sites.

Almost two decades after writing, Anthony published a book of short poems in the 1990s. More recently he has written two autobiographical books.