Many music fans like to search out the meaning of the songs they know and love. Whilst many of the most popular songs are from the singer’s personal experiences, some of the real-life stories are a lot more off-the-wall than you can imagine. Here we look at the real-life stories behind 5 famous love songs.

It is well known that the members of Fleetwood Mac had tangled and unhappy love lives in the mid 1970s. From the anger and despair came Rumours, one of the greatest albums of the rock era. Lindsey Buckingham wrote ‘Go Your Own Way’ and ‘Second Hand News’ about Stevie Nicks. Stevie Nicks sang about Buckingham’s philandering and loneliness in ‘Dreams’. Christine McVie at least had a happier take on romance in ‘You Make Loving Fun’. It added to the strangeness of the album that it was not about her husband, the bassist John McVie, but was actually written for the band’s lighting director with whom she was having an affair.

The woman with hair as deep as ink and black as the deepest sea is singer-songwriter PJ Harvey with whom he had a brief, but strong relationship that had a big impact on them both. Their relationship inspired Cave to write the songs ‘West Country Girl’ and ‘Green Eyes’ on his 1997 masterpiece The Boatman’s Call, and appeared again in 2008’s ‘More News From Nowhere’. The former couple reunited on-stage at London’s Palace Theatre to perform Cave’s love song ‘Henry Lee’.

Amy Winehouse, Back To Black 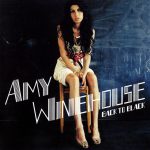 Amy Winehouse wrote her most famous song after her boyfriend Blake Fielder-Civil broke off their relationship. This time the “black” in the title refers to the break-up driving Amy to booze, depression and heroin. This song for lost love is all the more tragic as a few years later, the singer died from substance overdose.

Taylor Swift, Out of the Woods

Mystery surrounds Taylor Swift’s relationship with Harry Styles, the most notorious of the singers from One Direction. It is unclear if Swift was bereft when their relationship ended or not. It’s not even clear how long their relationship lasted. For all the unknowns, it is agreed that the break-up inspired her to write songs about it. The excellent ‘Out Of The Woods’ has a catchy tune, even though it is the poetry of loss.

Leonard Cohen met Marianne Ihlen on the Greek island of Hydra in 1960. He said she was most beautiful woman he had ever met and they became lovers. ‘Marianne’ is from his first LP and his tender farewell to her. She reappeared in a photograph on the rear of his second album ‘Songs from a Room’ and is the subject of ‘Bird on the Wire’. This song is all the more poignant as Cohen wrote a famous letter to say goodbye to her again, just before she died, more than half a century later in 2016.